This batch of soap was planned from the beginning with The Admirable Lady in mind.  That might seem a little sexist, of course, but there is something about it that I feel is just very lady-like – I think it could be the associations of bathing in milk and Cleopatra, or the inclusion of honey which lends it a more softer, feminine appeal.

If I may, I ‘d like to cover this idea of sexism in cosmetics some other time, so if you do have strong thoughts on the subject, please do let me know and I’ll cover that in a later post.

Back to the GMOH (as the soap is often called).  It is a soap well loved by many.  The combination of these 3 ingredients, when coupled with a good mix of oils, can yield a soap that feels wonderful both during and after use.  The milk itself does not appear to add anything to the soap when looking at it from the perspective of one use at a time – the benefits of the milk tend to come from long-term rather than short-term use.  The oats provide a number of benefits such as exfoliation, reducing inflammation and itching, as well as generally enhancing your skins natural defenses.  Honey contains a lot of sugar, which when used in soap is great at adding bubbles.

So what we have in this soap are ingredients that will bubble a lot and make the skin feel great – little wonder that it is considered by many soap-makers to be a classic and is consistently a top-seller for those who sell their soaps.

I decided to go with a fairly standard recipe – I kept the coconut oil under 20% and split the rest between olive oil and lard almost evenly.  I kept the lye discount at 5% again so that I had a good frame of reference to compare this recipe to other soaps that I had made.

I had frozen some goats milk which I added in to some water to get the total amount of fluid I needed – I put this mixture back in to the freezer and it all started to harden, then I slowly added my lye to it, letting the heat from the reaction melt the fluid as I went.  As sometimes happens with goats milk, it went very orange when the lye was fully added.  I was quite fortunate and it didn’t actually get so hot that the milk was scorched, so the freezing and slow addition process helped me there.

I ground up some normal oats using a mortar and pestle, ending up with a rough powder.  I then put this and the honey in to my mixing pot for cold process soaps.  To this I added the scent (a honey fragrance oil) and the oils, stirring it well. I then added in the lye mixture, brought it to a medium trace and poured it in to the moulds.

I didn’t look to prevent gel but I also didn’t work hard enough to ensure a full gel, leaving me with tell-tale ring of a partial gel – where the soap in the centre (insulated by the rest of the soap) is gelled and the soap on the outside (not well insulated) is not gelled. 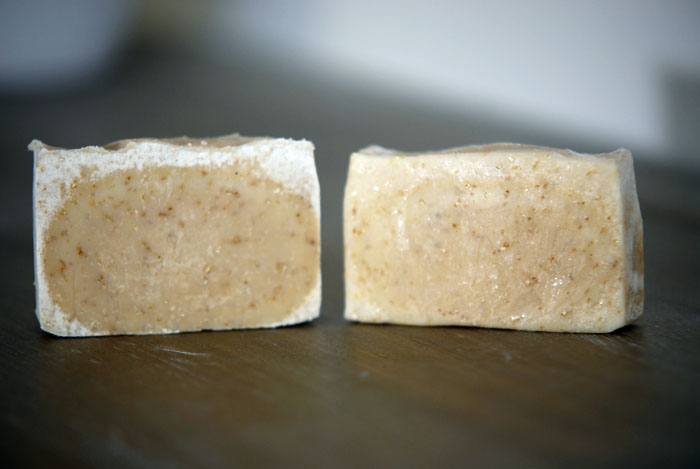 In the image, the soap on the left is untouched.  We can see a heavy layer of soda ash on the areas that didn’t gel – soda ash is where sodium in the soap reacts with the air to form a salty crystal.  It is harmless and is easily removed with some water, which is what I did with the soap on the right.  It is interesting to note that ash only forms on the ungelled areas, worth bearing in mind if you struggle with soda ash and want to avoid it.

The scent was really strong (and still is!) and is very much a feminine scent – ideal for The Admirable Lady.

In use, it is a lovely soap.  Very bubbly but creamy lather, with some light exfoliation from the oats.  It has also proven to be popular with those who have received it.

Next time, I think I’ll reduce down the amount of fragrance oil that I used – but this depends on feedback from those who have used it.