Again, very late with this post as I made my first soap on the 17 November 2013.

As a first batch, I wanted to go for something easy to make, wouldn’t put up too much of a fight or anything, but would also be useful.  I know a lot of people who suggest using just 1 oil and/or no scents at all.  Personally, I want a quick win to get my confidence up and get me going.  A soap that I don’t want to use or have to wait a long time to cure would actually then make it harder for me to get in to soaping.

So my first batch consisted of –

I then scented with Sandalwood and Lavender essential oils and added some ground poppy seeds as exfoliate.

I didn’t have anything that I was willing to use for Hot Process, so I went for Cold Process – which was fine as it was a good way to kick off.  There were no real issues to speak of, although I did really make sure that the oils and the lye were both between 60-65 degrees C when I combined them, something that is apparently not quite so important as I thought it would be.  For a first time I couldn’t be happier with how it went.

At the time I was using normal silicone baking molds which didn’t give the best shape to the soap.  But trimmed up, they were a good shape.  Trimming the edges off also had the benefit of making it appear a more regular colour – it had partially gelled, the sections that I cut away took off most of the ungelled soap which also went a long way to making it look better. 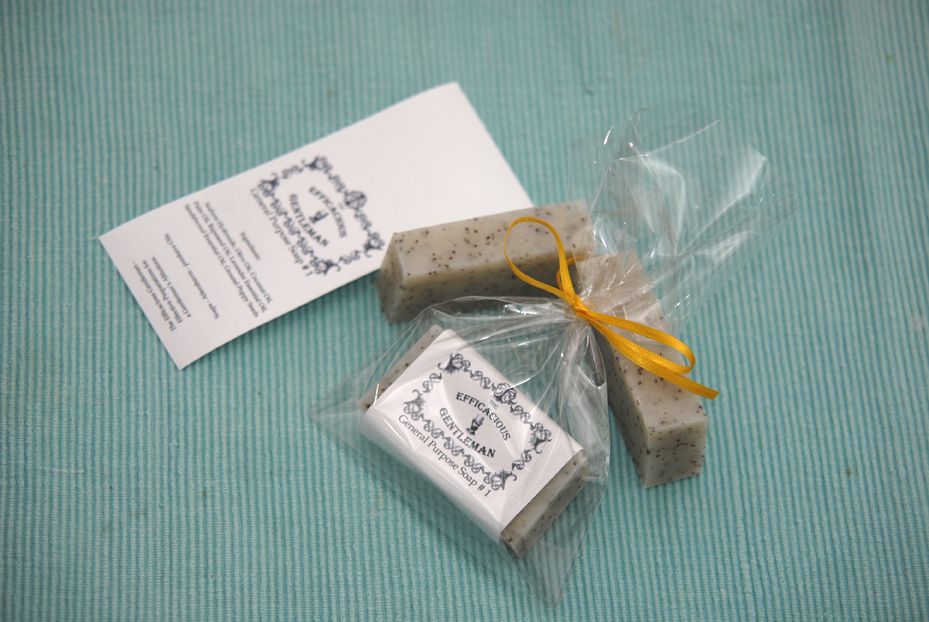 But the important thing is how is it to use.  Now that it’s had a good cure, it’s a perfectly fine soap – I only used a 5% superfat and used a little more Coconut Oil than some people would like.  That said, it was made to be a general purpose bar of soap for Efficacious Gentlemen and it is certainly that.  It has a pleasant smell when using, one that doesn’t linger too long after use.  It certainly cleans but doesn’t dry out (my) skin.

It’s a recipe that most likely will be used again, maybe with a little tweaking, though.

The picture also highlights another issue – packaging! Plastic bags might well work, but ribbons and bows for a gentleman might be a little bit too much……………………….