Almost there, catching up on things that I have already made.  The trouble is, I’m still making things as I write the blog so the finish line keeps on getting further and further away!  But seeing as talking or writing about soap is very high on my list of pastimes, this is certainly no bad thing.

In the olden days, before vegetable based oils were widely available and affordable, people made soap with animal fats.  Lard is from pig fat while Tallow comes from cows or sheep and sometimes game, too.  The fat can come from various parts of the animal and the quality and name of the finished product will reflect that.  The pig fat is heated slowly with some water which causes it to melt and separate.  The solids, called Scratchings are strained from the liquid and can be eaten or used in cooking – my father used to LOVE them.  The liquid, however, cools down to be lard, which is then also used for cooking, or in my case, soaping!  I didn’t make the lard myself, I have to say – I bought a nice pack of pre-made lard from the local supermarket.

Lard in soap is very popular with many soap-makers, but just as many will not use it.  There are many people who will not use anything that contains animal fats, regardless of whether or not they are a vegetarian and this includes soaps and cosmetics.  In my view, I eat meat and the less waste that there is with that, the better. 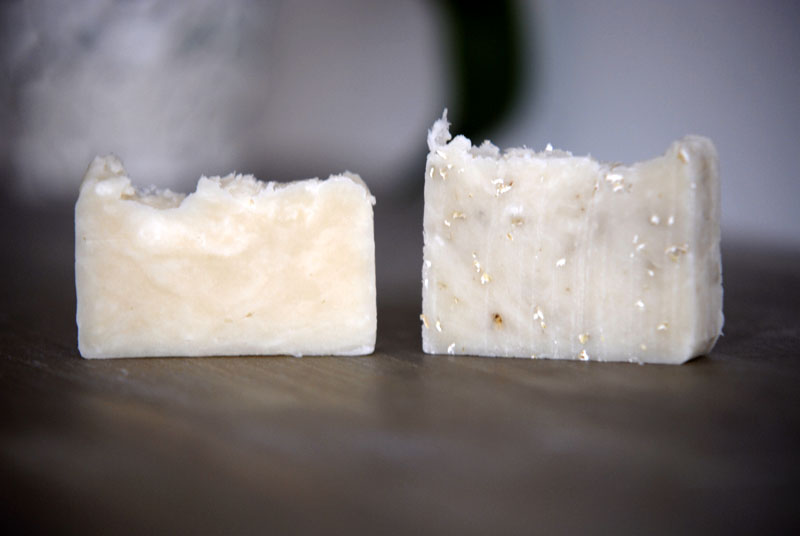 I melted the oils in the slow cooker and prepared the lye solution.  In Hot Process, you don’t need to worry about whether or not the oils and the lye are at a similar temperature, so I could just pour it in when the oils where melted.  It took quite a while to get to trace and then I let it heat through, giving it a stir every now and then so that the soap on the edges didn’t cook too much more than the rest of the soap.   When it was finished, I put in some rosemary and some thyme essential oils, mixing them through nicely.

Half of the batch was moulded up as it was.  With the other half, I stirred through some oats as exfoliate and then put it in the mould.

In use, they both feel really good!  The scent mix is one that I am not overly keen on and when I first used it I thought I could still smell a slight lard smell.  After a full cure, that seems to have gone away which is a relief.  The lard really does make a great soap – I know some people reading this will not like the idea, but it really feels great!

I will certainly make more lard-based soaps in the future, but I will also be looking to change the scent combination.