As it is that time of year again, I thought that I would combine a couple of my favourite things.  I have wanted to try my hand at using alcohol in soap and what better than a bottle of Mulled Wine (or Glühwein as we call it here in Austria) and a nice Christmas Spice fragrance oil?  Combined with a little bit of a nice deep red colour, we should have a very interesting and seasoal soap. 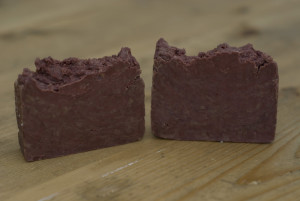 It was the second time that I used something other than water to mix the lye in.  I had heated up some Mulled Wine to reduce it down to a thicker syrup and evaporate some of the alcohol away – alcahol can cause some issues during the soap making process.  I added water to the wine syrup to give me the total amount of water that I needed for the batch, cooled it down in the freezer and then slowly added my lye.  Adding lye to wine or beer (or many non-water liquids) can create a lot more heat than with plain water.  It can be dangerous if you add the lye too fast, so taking your time is key.

Even though I added my lye slowly, there was no way that I could avoid the smell!  The solution turned brown and really did smell bad.  So much so that I worried about how the final soap would end up.

During the cooking stage, the smell grew fainter and fainter.  Then when I added the colour and scent in, it really came together nicely.  The scent is very clearly Christmas Spice, with tones of clove and cinnamon giving it a festive flavour.  In use, it was a lovely soap with a lot of lather – it was, however, a touch too much colour as it turned the water a light shade of red.

In all, a lovely seasonal soap which I will be making again, albeit with less colourant.

Was cutting meat in the kitchen today and had the

New video up on my YouTube channel - how to make a

Made another batch of deodorant - and a new video

A collection of some of the waterfalls we've seen

Yet another round of smoked steak. I knew it would

Had the parents-in-law over for lunch - we had pro

When I cut my hand, I was trying to split some woo