For my ninth soap I decided to revist one of my first soaps again.  It is something I think is worthwhile as I would rather have made a few recipes that I am happy with rather than a lot of recipes that I don’t feel are really quite there yet.

I thought that the original Pine Tar soap was good, but there were two things that I wanted to try and change – more Pine Tar and a harder bar as the original was fairly soft and didn’t last too long.  The Pine Tar oil itself makes the bar softer, so using more was actually going to make the hardness issue worse which meant I would have to look at other parts of the recipe.

I took the amount of Pine Tar up to 15% and thought that lowering the Olive Oil in exchange for more Palm oil would help keep the bar harder.  All well and good so far.  The big problem came when I decided to lower the water amount quite a lot in an effort to reduce the amount of time it would need to sit in the moulds, allowing me to cut it and set it to cure all the sooner.  With most soaps, this is not a problem – but Pine Tar is not most soap………………..

Pine Tar soaps tend to go through the stages of trace rather quickly.  Depending on the recipe used and the temperatures soaped at it may or may not take a while to actually reach trace, but when it does, it will go from thin trace to a thick butter very quickly.  Using less water caused this to be even quicker, so when I came to “pour” the soap in to the mould, I ended up spooning out lumps of it and having to push it in like play-dough.  Bearing in mind it was Cold Process and so I was dealing with a still-caustic substance that was both slippery and sticky, it made for an interesting few minutes to say the least. 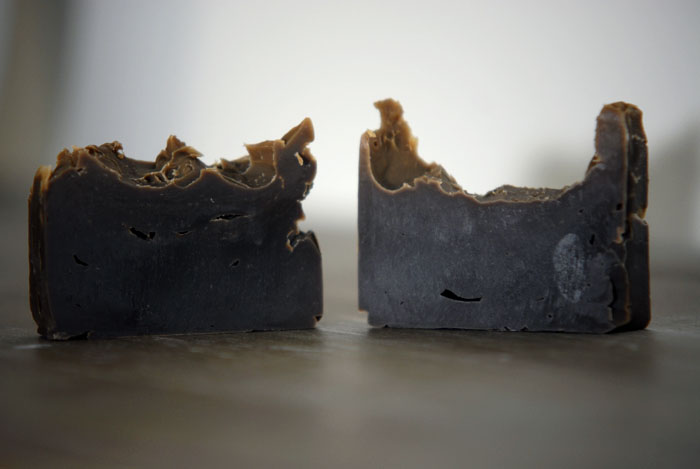 The results of this troublesome moulding stage can be seen on the soap – spikey textured tops were not part of my plan!

That said, the soap IS harder than the original recipe and does last longer in use.  The extra Pine Tar has really brought the colour down a bit to a really dark brown which I quite like.  The trademark scent is there, nice and strong but also mellowed with time as we cure.