Getting back to soaps, but still catching up on soaps made before the blog started, today I want to talk about the second soap that I made on the 14th December 2013 – a nice Pine Tar soap.

This type of soap is one of the reasons why I started this whole thing. It’s a classic recipe, used from the 1800s through to early 1900s. It fell out of fashion somewhat, as many of the things I make have. This was mainly due to the carcinogenic properties of Creosote that often ended up in Pine Tar products. But a good Pine Tar contains none of that rubbish.

In fact, Pine Tar soap is actually very good for the skin and is often said to clear up a good number of skin issues from acne to psoriasis. One issue that many people have with using it, though, is the smell! Depending on the exact recipe and also the particular Pine Tar used, it has been described as burnt rubber, whisky and smoked ham!

As a second soap it was maybe a slight stretch as it is not the most simple soap to make. One important aspect is soaping at a cooler temperature as the Pine Tar makes things a little warm. It also increases the speed of tracing A LOT, so speed is key.

I didn’t add in any other scents as I wanted to make this one for it’s use on problem skin, so adding in scents could well then stop some people from using it.

When I had melted down all of the oils, apart from the Pine Tar, I put it in to the mixing bucket then added in the Pine Tar and left it to cool down.  I mixed up my lye solution and also left that to cool.  As was suggested, I got everything ready for pouring the soap so that I wouldn’t have to worry about it later on.

When I mixed the lye solution in to the oils, I didn’t notice that it reached the first stages of trace particularly fast.  What I did notice, however, was that it went from light to heavy trace VERY quickly indeed!  So much so that I was having to try to smooth it out in the mould rather than it pouring in flat.  I did a bad job of this and so the tops are uneven, which is a shame.

I also thought that I would try to prevent the soap from gelling by putting it in to the freezer and then defrosting it slowly.  It didn’t really work, because of the Pine Tar, but it was an interesting experiment giving it a go.  It was also the first time using my homemade moulds (maybe a future post on that!) and it was good to see that they worked well. 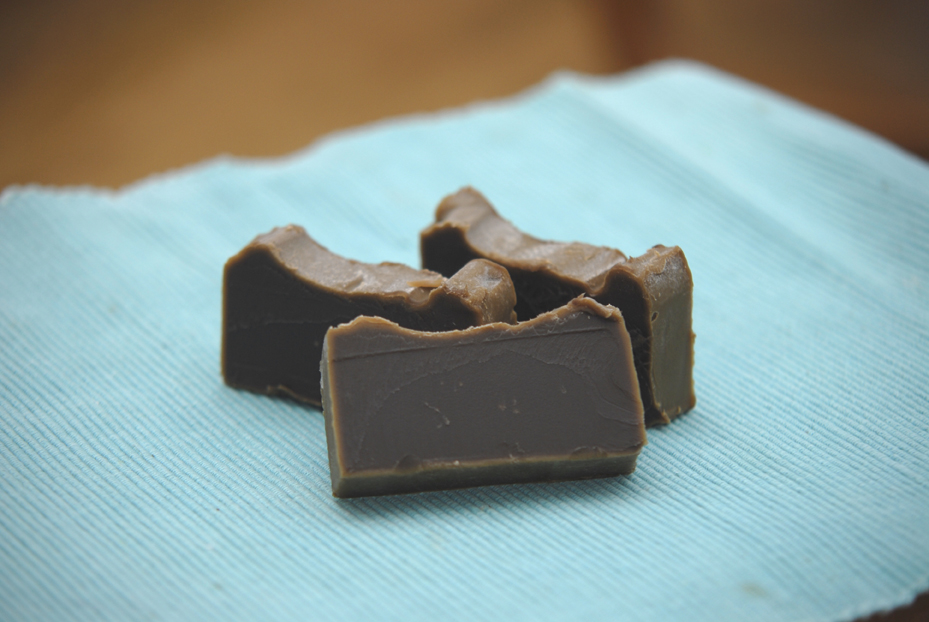 To use, it’s a lovely soap! Leaves the skin feeling good with no dryness or any strange feeling from the Pine Tar.  The scent lingers just for a while and is actually great – it took a while for my lady wife to get used to, but now it’s no problem at all.

Again, I think I’ll adjust the recipe slightly next time and certainly will not look to prevent it gelling.  But this soap is firmly in my range and will be made time and time again.