In Austria, a lot of people use Pumpkin Seed oil on their salads or in other ways when cooking. It has a rich, nutty flavour and the colour is a deep green. As is the case since I started soap making, I now look at all oils and wonder if it can be used in a soap! I was pleased to see that it is one of the options in the online soap calculator that I used (soapcalc.com) and so I set about coming up with a recipe using Pumpkin See oil, but still have a useable soap.

While there is some debate about how healthy Pumkin Seed oil is to eat (in moderation and with a balanced diet it is not only good, it is also jolly tasty!) the benefits of using it externally are generally accepted. It helps to regulate the sebum (the naturally produced oil) on the skin – too little sebum and the skin is dry, too much and it is oily – and it is also an anti-inflammatory, so it can help with troubled skin. I wanted to make this soap using Hot Process so that I could make sure that a lot of the Pumpkin Seed Oil was remaining after the lye had reacted – I wanted the properties of it in the soap and Hot Process is the only way to select which oil is the superfat (oil that isn’t actually turned in to soap) when using multiple oils. I’ll be posting about the processes in making soap soon, with more details.

Even though Pumpkin Seed Oil is good for the skin, it is not an overly good oil to soap with – it is conditioning, but it doesn’t add much to the soap other than that.  To help increase the lather, I added the Castor Oil to the recipe, as well as using 1 tablespoon of sugar per kilo of oils.  To help make the soap easier to work with when using Hot Process, I also added in Sodium Lactate, which helps make the batter easier to get in to the moulds. 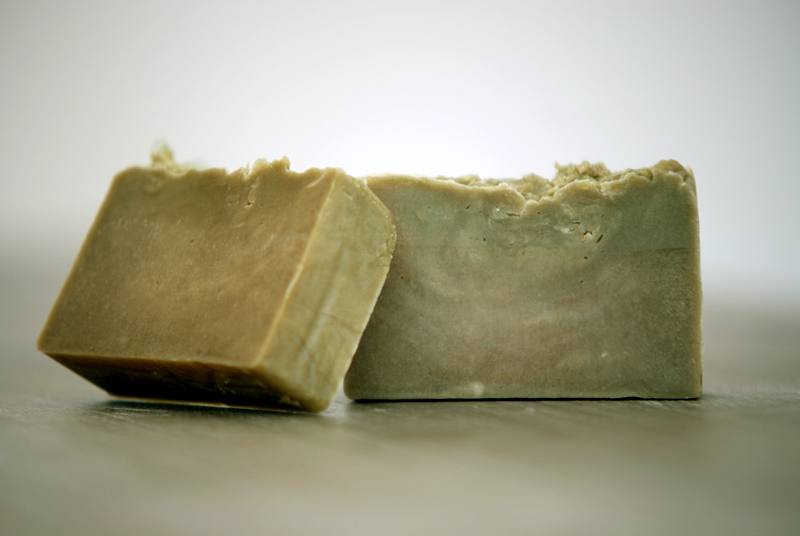 When the soap was cooking, it was a very dark reddy-brown colour.  I was hoping for a pleasant green colour, so I was a little worried.  After the batter was cooked, I added in the remainder of the Pumpkin Seed Oil and was very pleased to see it turn in to the rich green that I was after.

I left this batch unscented, as some of the natural scent from the Pumpkin Seed Oil was coming through – it really smelled nutty.  But it’s faded over time, leaving the bars smelling simply of soap.  It is actually an enjoyable soap to use – it lathers well, with the castor and sugar helping that along.  I also noticed that patches of skin that were often red, including around the neck from shaving, were getting better while using the soap.  It’s mild enough to use on the face, too.

In future, I think that I would look to add some scent in there, but also a little bit of green colour – over time the green from the oil has faded out to a sage-green, so a little bit of added colour would help to keep things bright.