Having really enjoyed the first salt bars and was getting low on stock – this gave me a great chance to experiment with a couple of changes to the previous recipe.

A member on the Soap Making Forum had posted some interesting ideas on changes to the oils. The previous recipe had 15% Olive oil, but this time I changed that to 10% Avocado oil, upping the Coconut oil amount to 85%.

Avocado oil is generally great for skin – from soothing skin issues, increasing the health of the scalp and boosting collagen production, Avocado oil is a good addition to a soap.

I also had a look at a soap that is easier to get hold of locally – I didn’t use it last time because I specifically looked for a salt with no added iodine which is actually hard to find around these parts. Checking out the packet, it seems that the amount of added iodine was rather small so I thought it would be worth chekcing out. Too much iodine (or other minerals) can make the soap “weep”, where these minerals come to the surface and leave a wet layer on the soap, but I wanted to see if this new salt would be an issue.

Other than that, I kept things pretty much the same – the amount of salt needed, the superfat and so on – so that I could really see the differences between the older recipe and the new one.

Once again I thought I’d try my hand at swirling. Having learnt from the last time that too much of a good thing is a bad thing, I decided to go at it with less gusto and more delicacy! I went for green this time but one thing that I didn’t consider was the effects from the Avocado oil. The colour from the oil itself actually coloured the soap in a rather interesting way. Not planned, but also quite nice 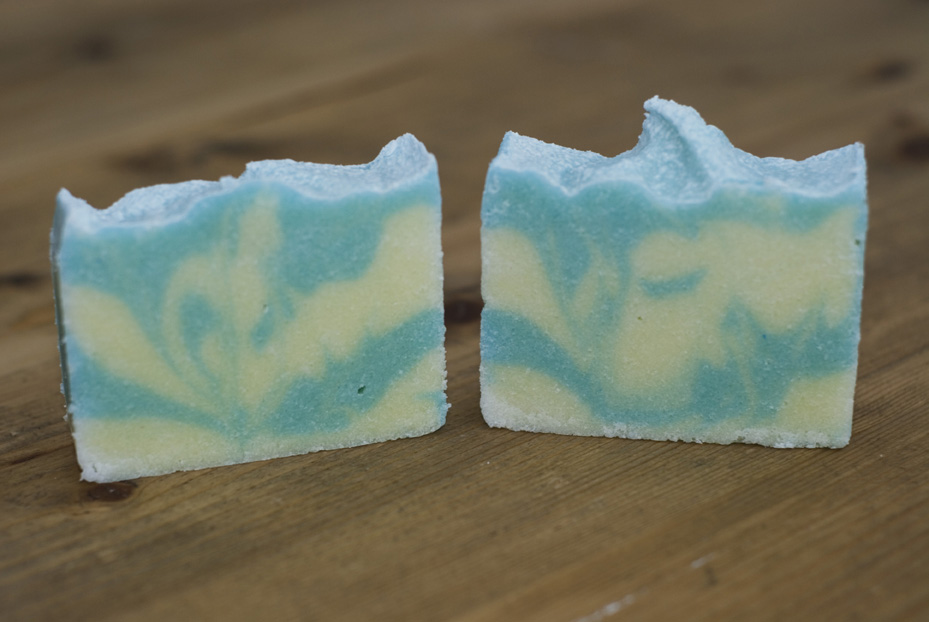 The results are a lot better – less blending of the colours together and some more visable swrirls. Less is indeed more.  It can be hard to do as with my moulds (loaf moulds)  the results can only be seen once the soap is cut, so this is certainly an area where practice and experience is required.

Unlike last time, I decided to scent the soap with a White Tea fragrance oil which goes very nicely with the salty freshness of the bars and the pastel colours.

In use, it lathers beautifully and leaves the skin feeling fresh and clean, but not dried out.  Very happy with the results indeed!

This stage in the mead making process always fasci

Bärlauch (wild garlic, or ramsons) season is in f

Absolutely perfect day up on the mountains. Went u

Warning - smoking is addictive! Having made the sm

I was very excited about this breakfast, as I coul

This 5th mead has been sat for about 15 weeks now,

The easy part is over! Had this belly pork curing

Even after just one day this soap is turning in to

Planning a trip to the UK and realised that I don'

When you can't get proper bacon where you live, wh

Passed this place every time we went skiing, so as

It's finally here! Well, I say "finally" but I hav

Saw the sun about to rise on this misty morning an

Recently posted about getting the old Praktica BC1