When it comes to soaping the odds are stacked so that mean, eventually, every soaper will have a fairly major issue to contend with. It might be a batch overheating or separating in the mould, or some issue with fragrance oils reacting badly and causing the soap to seize solid in the pot before it is even poured. This happens most often when trying out a new recipe or technique and not so often with something tried and tested. As it happens, I had a pretty major issue with a batch of soap that I was making. While it was a slightly different recipe, the problem came from something that can strike at any time – soaper error.

I was making a batch of the General Purpose soap, but looked to replace the Palm oil with some Lard. I was using hot process, my preferred method of soap making that has a particular issue – adding essential oils to a hot soap can cause the EO to evaporate. With this in mind, I decided to let the cooked soap cool down a little bit…………………………

………….and waited a little bit too long! Instead of having a cooler but still fluid soap, I was stood looking at a pot of almost-solid soap. Fortunately it was only “almost” solid, so I was able to add in some more water, mix it up (which was rather tricky with the soap being the consistency of cold butter) and heat it once more. The hardened soap melted back down and I was able to finish it off almost as planned. As it turned out, the extra water made things very tricky and it was very wet in the moulds. It also needed a very long cure, but has turned out to be a lovely (albeit not the prettiest) bar of soap. 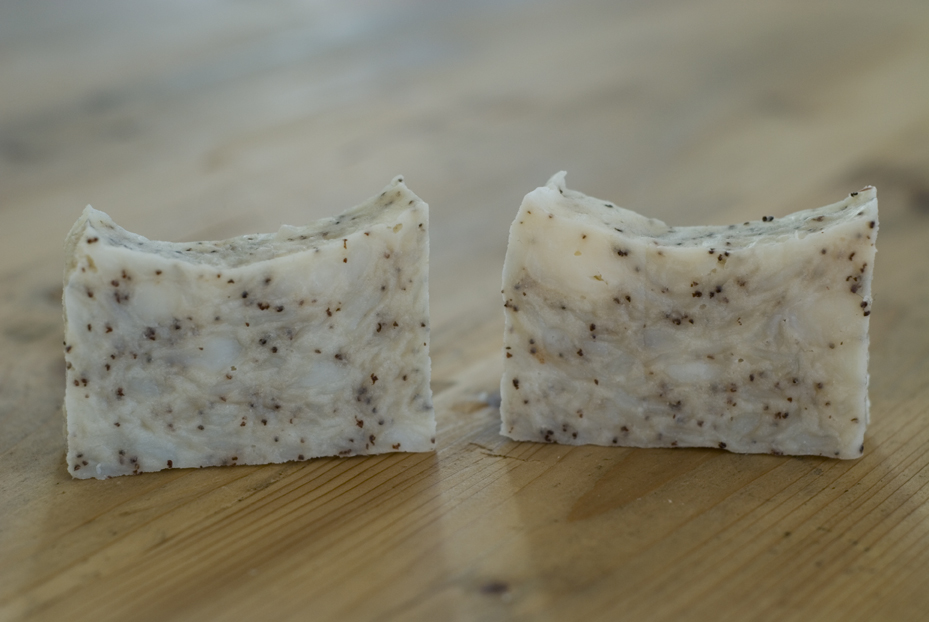 This was not quite a rebatch, but the idea is similar – take a batch of soap that is not what you planned, grate it up in to smaller pieces, add water and heat through until the soap is melted again. You can then add in fragrances or colourants, but the main reason is if there was a mistake and the soap had too much lye, leaving it lye-heavy. By melting it back down, the missing amount of oil can be added in to react with the lye.  In this case, some of the lumps were rather large and didn’t melt down enough – they can be seen in the photo as the very white parts with no poppy seeds
So for me it was an experience, a lesson that I needed to learn the hard way – even when you are very careful in most aspects of soap making, not being on-the-ball in all parts of the process can result in a fairly major issue.

As this soap did not turn out as planned, I will be making it again in the future – hopefully with no issues – and giving it a proper write up.