The third soap that I made (on the 6th January 2014) is a Castile soap, another one that has a particular purpose – it is a soap made with only one oil, Olive Oil. It’s named after the Castile region of Spain where it was originally produced using the same techniques as with Aleppo soap but without the Laurel oil which makes an Aleppo what it is. As laurel oil wasn’t easy to get hold of so far west, soap was just made with the abundant olive oil. A Castile has no other oil than olive – some people market soap with mostly olive oil as Castile but it is actually Bastile, a soap with high olive oil and one or more additional oils.

Castile soaps are maybe not the most exciting soaps in the world – a lot of people prefer Bastiles (or Bastiles sold as Castiles!) because the addition of other oils changes the way the bar lathers, feels on the skin and so on. But a true Castile has an ace up the soapy sleeve – it is a very VERY mild soap. People often use it on babies (avoiding the eyes, of course, as soap will always irritate the eyes) because it is so mild. I actually made this soap as a test, but also because I know someone who is allergic to pretty much everything. This sort of soap is ideal in these situations and I made it unscented and uncoloured to really make sure there was very little in there that could be an irritant to anyone.

I do have to say, though, that this soap requires a very long cure.  Some say not to use it before it has cured for 3 months.  Others say 6 months and still some won’t touch it until it has cured for a full year!  I made mine so that it will have about 12 months in time for gifts at Christmas 2014, but of course I’ll be giving it as gifts before then. 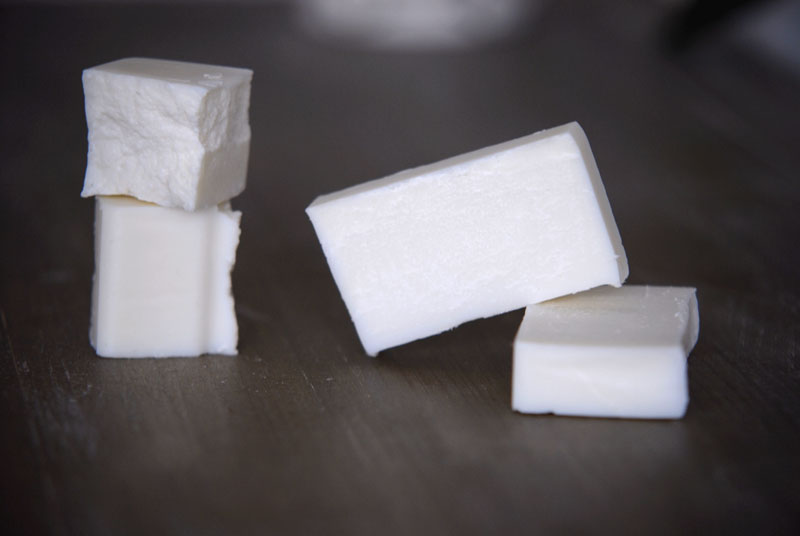 When making this batch, I froze the soap after pouring.  I knew that Castiles are often very white, as olive oil usually produces a whiter bar (when it isn’t adulterated, that is) and I wanted to make sure that it didn’t gel to keep that very natural white colour.  I had also used a water discount (simply mixing the lye in to less water) which resulted in a more brittle bar by the time I had defrosted it to cut.

I had also miscalculated my mould size as each one takes 560gm batches rather than the 500gm that I had thought, so one batch was filled to my desired bar height and the other then had much less batter.   This loaf was cut in to cubes rather than bars which resulted in a lot of mis-shaped cubes.  The bars themselves have come out fine, though.

I haven’t used it yet – it still has a wee while to cure. But it will be one that I make from time to time, just to have it on hand for those that want/need something particularly mild.  Next time, I will use more water in the mix and might well put one mould in to the oven to make sure it fully gels to see how it looks compared to the ungelled one for future reference.