This was a type of soap that I was particularly looking forward to making.  I had read a lot of good things about Salt Bars before, looked in to what made them so special and was eager to try it out for myself.

An average soap will not lather in salt water – the salt saturates the water and inhibits the way that the bubbles are formed.   With that in mind, it seems strange to add salt to a soap.

Salt bars counter this issue by using a lot of coconut oil. Coconut oil is usually kept rather low in soaps as it can be drying when used at over 20 or 25%, depending on the skin type, of course. The lye-discount (or how much oil is not turned in to soap) used also affects how drying a soap would be.

A salt bar generally consists of between 70-100% Coconut oil with a lye-discount of about 20% to counteract the drying affects – unsaponified Coconut oil is actually amazing on the skin, so the large amount in a soap bar really helps. Oils used to make up the balance are things like Castor oil or other ‘soft’ oils. As for salt, it is usually between 80-120% of the weight of oils – so if we use 100 grams of oil, we would use between 80 to 120 grams of salt, depending on the recipe. Opinions vary on what is best, as is often the case with soaping!

On the subject of salt, it is worth mentioning that not all salts are created equal, especially when it comes to their use in soaps.  Many salts high in other minerals can actually cause the soap to weep, as the minerals slowly oooze from the soap following the saponification process.  Dead Sea Salt, for example, should not be used at more than a small percentage of the total soap used, mixed with normal sea salt, perhaps.  Many people just use plain old un-iodined table salt, especially those who don’t sell and so don’t need the ‘label appeal’ from something like Dead Sea or other named salts.  Soap with no added iodine is pretty hard to come by in Austria, but as the limit is set to 40mg of iodine per kilo of salt, some testing in the future might well be in order.

I didn’t scent, but in the future some sort of fresh or ocean scent would be great to use. 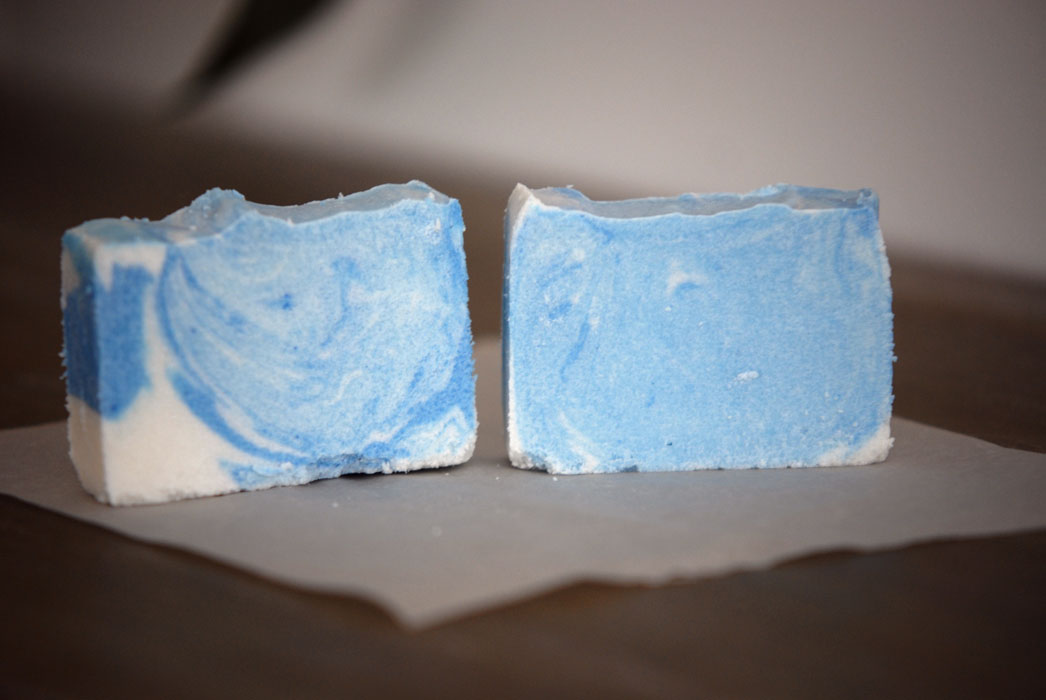 The process is fairly straight forward – I used cold process.  You make the soap as usual and then, at a thin trace, put in the salt.  It is best to add the salt slowly to avoid getting lumps.  It is also best to err on the side of caution and add sooner rather than later – the salt thickens up the batter a lot, so “one more stir” before adding the salt could cause more problems than it solves.  Having the moulds ready and to hand is also a very good idea.

Depending on the recipe and the conditions, the soap will need to be cut within a short time by soaping standards.  An average is around 4 hours or so.  The actual time will vary, of course, but there is a much shorter time-frame to work in – wait too long and the soaps will be far too hard to cut easily, too.

It was also my first time working with colours.  I put some of the batter in to another pot and added in the pigment.  It was not the best way to do it and I ended up using a bit too much when then allowed the colour to spread in to the non-coloured batter.  I poured some white batter in to the mould, followed by blue and then white and so on.  I then went through with a plastic spoon and swirled the batter around a bit – I think I over did it and so ended up with a pale blue soap with some white areas.

In use, it’s a really interesting bar.  Leaves the skin feeling really clean and smooth.  It can be a bit drying for my tastes, but after a few minutes the skin is left feeling a little bit scrubbed and fresh.  Next time I make a batch, I might well up the lye-discount to 25% to see how much difference that makes and maybe play with more exciting salts.

But considering salt water and soaps don’t usually mix, this one is a rather interesting and enjoyable soap to use!

This stage in the mead making process always fasci

Bärlauch (wild garlic, or ramsons) season is in f

Absolutely perfect day up on the mountains. Went u

Warning - smoking is addictive! Having made the sm

I was very excited about this breakfast, as I coul

This 5th mead has been sat for about 15 weeks now,

The easy part is over! Had this belly pork curing

Even after just one day this soap is turning in to

Planning a trip to the UK and realised that I don'

When you can't get proper bacon where you live, wh

Passed this place every time we went skiing, so as

It's finally here! Well, I say "finally" but I hav

Saw the sun about to rise on this misty morning an

Recently posted about getting the old Praktica BC1