My very first soap was one that I had hoped would be a soap that could be used for the face, body and hands for people with normal skin – hence the name “General Purpose Soap”.  It will come as no surprise that while the idea was sound, the recipe itself was not!  Making soap is fairly easy.  Making a soap that does exactly what we are looking for is much harder to do.  The General Purpose Soap # 1 was perfectly usable – in fact it was very popular – but I thought that I could do better and wanted to come back and revisit it.

One of the main issues was the amount of Coconut Oil compared to the lye discount (the amount of lye left out of the soap so that some of the fats do not become soap) which meant that it could feel a little bit drying for some people.  I also wanted to look at changing the amount of olive oil from last time, increasing the palm oil to make the bar a bit harder.

I also wanted to make this one using hot process to ensure an even look, albeit a little bit rustic.  This also meant that I added in some Sodium Lactate to help keep the soap batter more fluid when I came to put it in to moulds.  I also added some sugar to help improve how the soap lathers up. 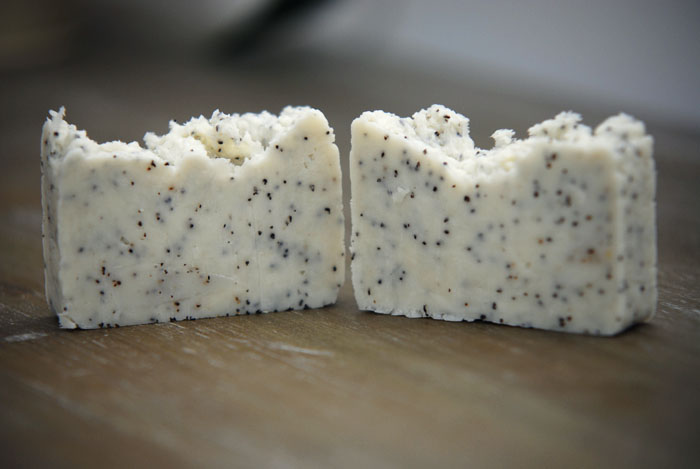 Everything else was the same – scents, exfoliant and so on.

I have to say, the change is an improvement.  It feels better and lasts longer than the first batch, but has kept all of the things that made the original recipe so good – the scent is great but doesn’t linger too long or overpower anything, the poppy seeds scrub but don’t hurt.

Will I leave the recipe as it is?  Maybe, but maybe not.  It is certainly a great base to work from and I will want to try it with lard instead of the palm and rapeseed oils.  That said, this is a great soap as it is.